In 1995 Caz Guiney completed a Bachelor of Art in Jewellery and Metalsmithing at Monash University under the tutelage of Mark Edgoose and Beatrice Schlabowsky.  Since 1997 Guiney has exhibited throughout Australia and in Japan, Korea, Germany, Chile and USA.

Guiney has been the recipient of two New Work Grants from Visual Art & Crafts Board of the Australia Council (2001 and 2005) and an Arts Development Grant – Creation from Arts Victoria (2006).

She has two children, aged 8 and 4 years.

Natalia’s primary focus lays in realm of amuletic and talismanic adornment. With much of her research delving into various aspects of superstition, folklore and ritual, her work explores our human inclination towards charmed objects and the power of belief.

Stemming from the Shinto notion that all objects have the potential to house spirits, Natalia aims to create works that emanate a sense of character and potency, while exploring the latent power hidden within.

It is not Natalia’s intention to recreate or imbue established beliefs into her pieces, rather, she hopes her pieces house the potential to strike an intrinsic chord within a person and become a receptacle for their biddings.

Natalia has an intuitive and playful approach to her materials and practice. Employing a myriad of traditional and unorthodox elements in order to create pieces that emanate a sense of character and spirit, Natalia flirts with the notion of magical potency, and the power of belief while transporting her cross cultural and historical research into a contemporary and abstracted context.

The work for this exhibition is from Cameron’s recycled object series. In these works she uses old and antique objects, with their own patterns either in their painted surface or embossed or engraved into the metal. The cases and tins used are often times sandblasted clean, so that the evidence of previous wear does not counter the pattern in its surface, through which a second pattern is then sawn. In these pieces the object is used to make two works; the one sawn from the object and one formed from the void. The absence of material is planned, and forms a second motif; the basis for this second work.

In the primary work, the pieces of the cut out pattern are strung on slim threads of stainless steel cable or silk. They depend on the tension of the thread against the weight of the strung elements to create the final structure. This is a seemingly fragile link, making it reminiscent of organic structures and networks like ecosystems, whose delicate balance is the result of an inextricable interdependence between the elements of the whole. Similarly these works are of a single structure, one that has been divided into parts, and re-linked into a spatially complex whole. These mutually supporting patterns, like any other system, are always under tension. As such it can flex and move, allowing the static parts to come to life. 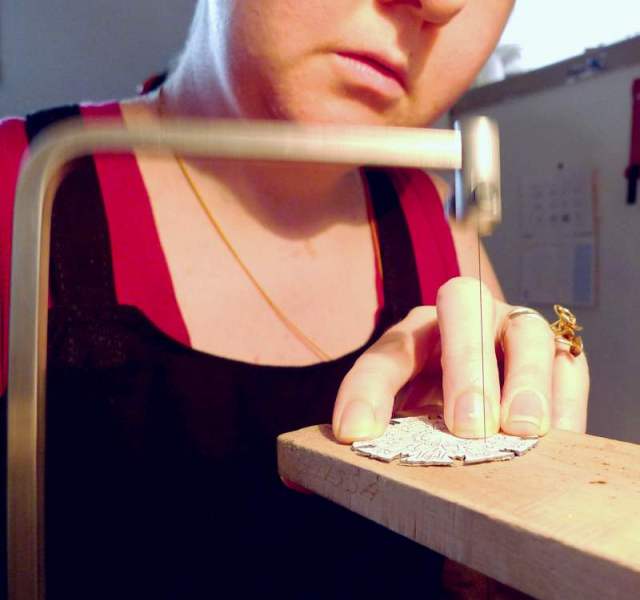 Report from the field

Last week Touch, Pause, Engage was re-presented as The Art of Engagement at Objectspace Gallery.  Opening alongside Best in Show 2011 the window installation is up until 26th February.  Here are a few shots of a hot and steamy Auckland evening.

There are those shoes again… 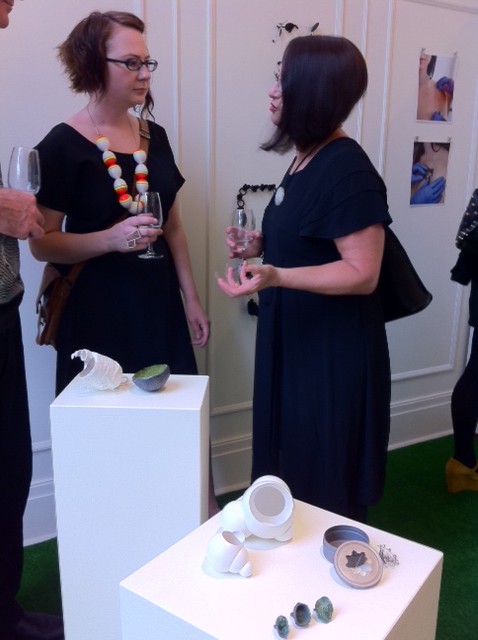 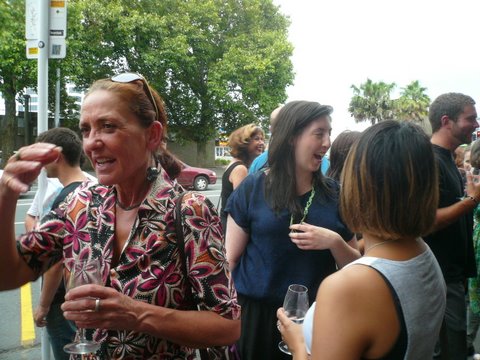 It was so hot we had to stand outside

but that was ok because we could look in the window…

Sharon, our subliminal infiltrations scribe wore her best work – that she made that morning 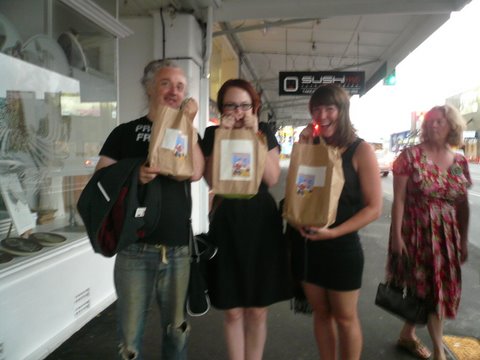 and Kristin gave the Australian jewellers a red cross pack with some goodies inside.

Thanks Vernon, Zoe, and Jasmine for making it over and helping develop the jewellery connections we are always looking for.

Lately, Zoe Brand has been trying to construct a life from items she has found in variety stores, from things she picks up from the sidewalks, and from materials/objects/possessions that once had a different fate in life before she laid her hands to them. She has a habit of collecting words and and likes to discuss the state of the Australian Cricket team over a beverage or two.

Katherine Wheeler is a Melbourne based artist, who completed a bachelor of Fine arts, Gold and Silversmithing at RMIT in 2007, and a Diploma of fine arts at RMIT in 2003.

She has participated in a range of group exhibitions since graduating in 2007, including Melbourne Hollow Ware, at Gallerie Marzee in the Netherlands, Precious Pendants at Object gallery in Sydney, and Figment at E.g.etal in Melbourne.

In 2010 Katherine was awarded an artstart grant to further her practice, and held a collaborative exhibition with printmaker Abby Seymour, titled Hidden Facets, which was shown in Hand Held gallery in Melbourne, and at Gaffa Gallery in Sydney. This year she will be participating in the Powerhouse Museum Sydney’s International Lace Award.

Katherine enjoys the process of making, and pushing the materials she uses to produce unexpected results. Often in her work various materials are combined seamlessly, then blanked out with white paint, giving the work surface a ‘skin’ or materiality of its own.

Through her work the repetitions and anomalies of nature are interpreted and referenced.  The decomposition and regrowth of life structures observed through time spent in particular rural childhood habitats is embedded in her memory, and recurs as themes in her work.

She is inspired by the correlation between object and memory, the growth and formations of sea life, the writing of Gaston Bachelard, (Poetics of Space), and by the interiors and exteriors of objects and homes. 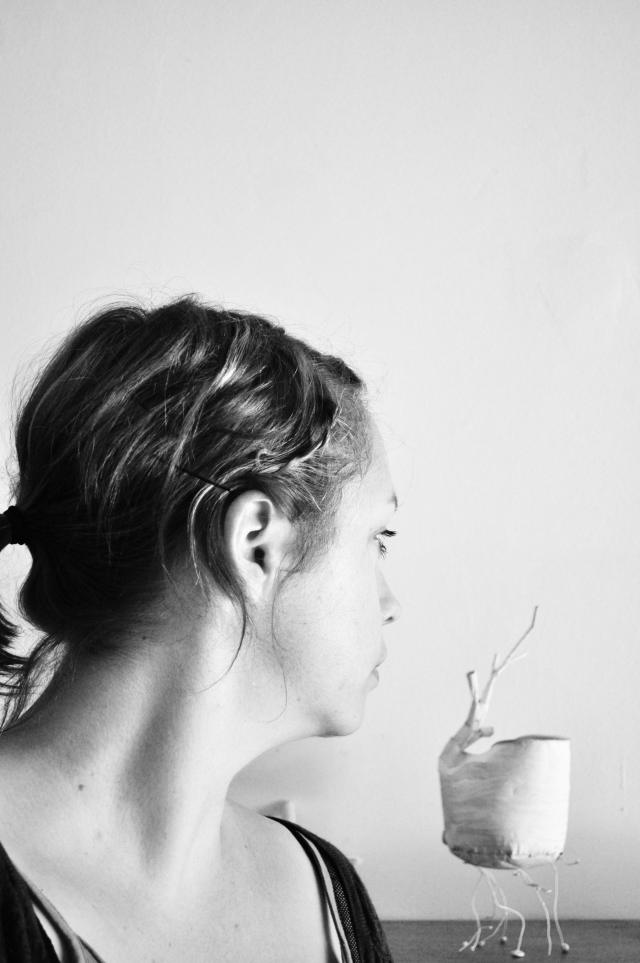 Lauren Simeoni is an Adelaide based artist whose work is an homage to the senses – a wearable passport to a whimsical ‘other’ reality. Simeoni finds the beautiful and seductive in what is otherwise thought of as mundane. Her work toys with mass-production processes and she frequently reconfigures mass produced objects to create wearables of seductive beauty.

Simeoni has a Bachelor of Arts in Gold and Silversmithing for Canberra School of Art, which she followed with a Design Associateship at the JamFactory in Adelaide. She exhibits widely nationally and internationally. 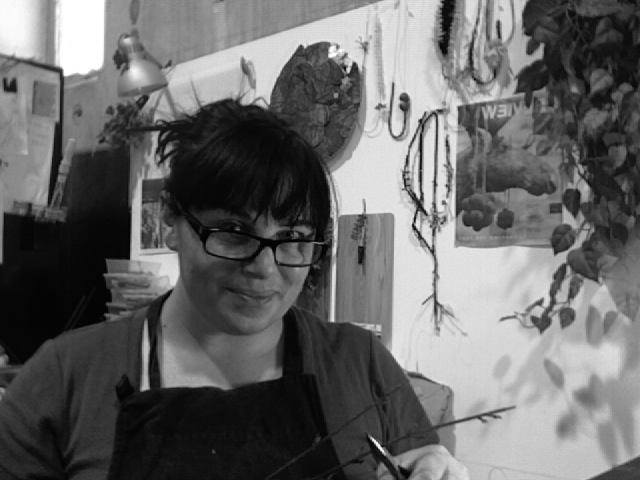 Yuko Fujita is a Japanese born Melbourne Jeweller. She studied gold and silversmithing at RMIT University in Melbourne and has been presenting her works at various selected exhibitions by invitation both nationally and internationally. The work shown in NZ is one of the pieces from her first solo show “Kodama-Return to me” (July,2010, e.g etal , Melbourne ).

The long history of body adornment and metal-smithing gives me a wealth of tradition to mine. This historical framework provides, and the associated “rules” mean, there is always something to rub up against or kick over. The perceived functionality and role of jewellery allows me to dispense with a lot of design considerations (it is what it is) and concentrate on the conceptual aspects of the work.

The value of the objects I use is their “meta-ness” not their materialistic nature (a useful juxta in the world of jewellery). This allows me to ignore, or at least subvert, traditional applied art and the facsimile nature of my casting practice further subverts the more formalist elements of jewellery design. There are themes I want to explore in my work and (hopefully) an initial response I would like to invoke. When I decide on an object; prejudices, preconceptions and misconceptions that make up cultural myth are just as valid as historical “fact”. Strong links to time and place as well as a connection to a person (real or imaginary) is important, as are objects that invoke some sort of emotional response. 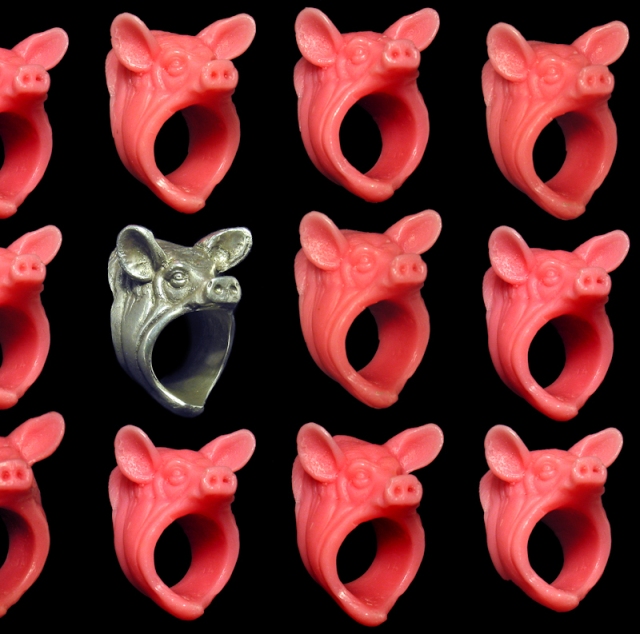 In 1993 Anna Davern completed her undergraduate degree in Jewellery and Object Design at Sydney College of the arts under the tutelage of Margaret West. Her post graduate studies and subsequent Masters degree (2003) were completed in Gold and Silversmithing at the Royal Melbourne Institute of Technology (RMIT) where she was mentored by Carlier Makigawa, Robert Baines and Louise Weaver.

Davern works from her studio in Flinders Lane Melbourne. She exhibits regularly at e.g.etal in Melbourne and has held 2 major solo exhibitions at Craft Victoria. She has been represented in numerous Australian and international group exhibitions including:

In 2004 she co-curated (with jeweller Vicki Mason) Cross Pollination, an exhibition of contemporary Australian and New Zealand jewellery at Craft Victoria, Melbourne, to coincide with the South Project a 3 year project initiated by Craft Victoria consisting of conferences, lectures, exhibitions and artists exchanges between countries in the Southern Hemisphere.

She is the recipient of numerous grants and awards and has participated in residencies in Sydney and Tallinn, Estonia.

She has written reviews for the Australian publications; Object Magazine, Artlink and Craft.

Davern teaches at the Box Hill Institute of Technical and Further Education (NMIT) and has taught at the Estonian Academy of Art.

More information can be found at www.annadavern.com.au and she has maintained a jewellery blog at www.davernator.blogspot.com since October 2006. 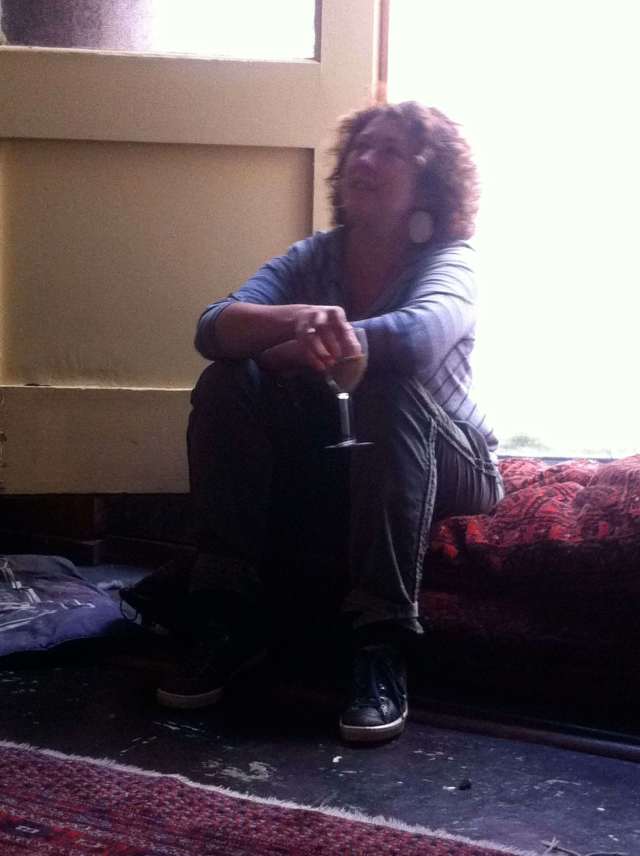